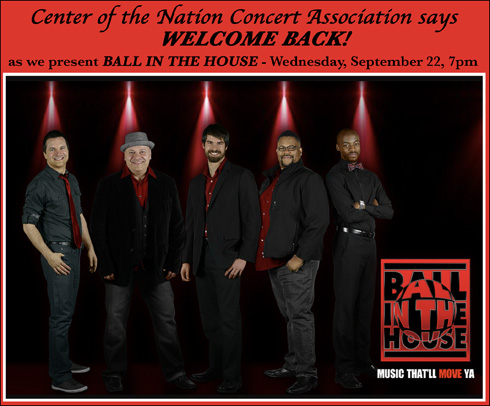 It's been a very long and quiet year or so across the stage at the Belle Fourche Area Community Center......but WE'RE BACK!  Concert season tickets are expected to go on sale in August.

And we're excited as we open the 2021-22 season Wednesday evening, September 22, with an enormously talented group of entertainers, Ball in the House!  They'll take to the stage at 7:00 p.m. with a capella "Music That'll Move Ya."

Based in Boston, Massachusetts, Ball In The House has been a highly sought after vocal group for some 20 years, and they normally perform over 200 concerts per year.

Their special brand of music combines Pop, R&B, and Soul music that brings all ages to their shows. The have played theaters, fairs, performing arts centers, festivals, and private parties. They have opened for such luminaries as The Beach Boys, The Jonas Brothers, The Temptations, Gladys Knight and Lionel Richie. They have traveled the world over, headlining both the 2016 and 2018 China International Chorus Festival.

In 2016 they won the Boston Harmony Sweepstakes and were voted Band of the Year and Best of Boston for Outstanding Musical Performers. For six years Ball In The House were the voices behind all the Cool Whip commercials and they recently wrote and performed the jingle for Amazon’s Prime Day. They also have appeared on America’s Got Talent, the Today Show and the Daily Buzz.

Some of the favorite tunes that Ball In The House love to sing include: The Temptation's "My Girl," The BeeGee's "Stayin' Alive," Stevie Wonder's "Signed, Sealed, Delivered," Taylor Swift's "Blank Space,"  Bruno Mars' "Treasure," KC & The Sunshine Band's "That's the Way," John Legend's "All of Me,"and many more –including a gospel piece or two.   Check out this video to preview the talents of Ball in the House!

Make plans now to attend this opening concert of the 2021-22 season for a great evening of a capella music with Ball in the House!  The show begins at 7:00 p.m., Wednesday, September 22nd.

See you at the concert!

Click on the videos below to get a glimpse of our future performers!

The links below represent but a few of our many outstanding performers in recent years!

The Limeliters performed on OCTOBER 2, 2014